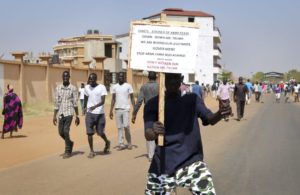 A demonstrator holds a placard during a rally protesting the United States unilateral arms embargo on the country, in the capital Juba, South Sudan Tuesday, Feb. 6, 2018. Anti-Trump demonstrations in South Sudan’s capital turned violent on Tuesday as people took to the streets to protest the U.S. president’s new ban on the supply of weapons to the army or rebels. (AP Photo/Sam Mednick)

JUBA, South Sudan (AP) — Anti-Trump demonstrations in South Sudan’s capital turned violent on Tuesday as people took to the streets to protest the U.S. president’s new ban on the supply of weapons to the army and rebels.

On Friday, the United States imposed a unilateral arms embargo on South Sudan, which is embroiled in a 5-year civil war. The State Department said it is “appalled” by the continuing violence perpetrated by both sides in the conflict.

Hundreds gathered outside the U.S. Embassy and the nearby United Nations base on Tuesday morning to show their anger.

“Down Down Mr. Trump” and “Don’t weaken our nation Mr. Trump” were posters held up by some demonstrators.

The protesters delivered a petition to the U.S. Embassy, an embassy spokesman confirmed. The petition cited the demonstrators’ anger over the arms embargo and accused the U.S. of supporting the rebels through the U.N. mission to South Sudan and neighboring countries, according to a copy seen by The Associated Press.

Although the protest began peacefully, it turned violent and the crowd harassed and physically assaulted three journalists, including a reporter for the AP, a German freelancer and a reporter for the South Sudan press. None were seriously injured.

South Sudan’s government wouldn’t comment on the embargo but condemned the violence.

“The security authorities would have been there for the peaceful protest,” said government spokesman Ateny Wek Ateny. “If violence took place it was individuals taking the law into their own hands.”

The civil war has killed untold tens of thousands and displaced millions. A cease-fire on Dec. 24 was broken hours after going into effect. The latest rounds of peace talks are underway in neighboring Ethiopia.