Home is where the heart is, but it is also where the health is. Last week, researchers at Princeton released a study that found that poor Black neighborhoods produce children (whether Black or not) with a higher risk of asthma than children in other neighborhoods. The study findings prove, yet again, that racism in housing markets has a negative effect on African-American health. It is the environment, not race, that causes these health issues. A study of Baltimore residents found that whites living in the same neighborhoods as poor African-Americans suffered the same health problems at the same rates as their Black neighbors.  However, it is rare that poor whites and Blacks live in similar conditions. Although there are more poor white people in the United States, the majority of poor whites do not live in poor neighborhoods. By contrast, poor African-Americans are concentrated in poor neighborhoods. Therefore, race is not the cause of poor health outcomes. Rather, the problem is that race and poverty combine to create neighborhoods that destroy Black health.

The Facts on Segregation

It is well known that during the Jim Crow era racially segregated neighborhoods were the norm in much of America. In 1968, Congress passed the Fair Housing Act, which prohibited racial discrimination in the renting or selling of real estate. Although the Fair Housing Act made discrimination illegal, the neighborhood patterns that emerged during segregation have proven difficult to change. Beginning in the 1970s, residential segregation did decrease, particularly in the Southwest and West. Cities in the Northeast and Midwest have seen the least change. One study found that “the levels of segregation in some U.S. metropolitan areas for blacks parallel the levels of segregation in South Africa during the apartheid era.” Indeed, in many cities, sixty percent or more of the Black population would have to move to create integrated neighborhoods. So, residential segregation remains a problem in America. 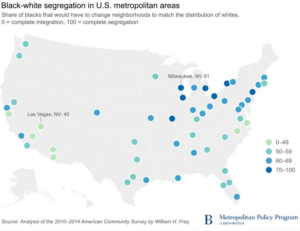 Many factors explain the continued existence of housing segregation. While overt racial segregation in housing markets is illegal, realtors and landlords still engage in practices that may discourage African-Americans from buying or renting properties in white neighborhoods, such as offering shorter leases or requiring higher deposits. Although some argue that racial segregation is a product of choice on the part of all involved, this is not the case.   The research indicates that African-Americans do not have a strong desire to self-segregate. On the other hand, white home buyers are reluctant to move into Black neighborhoods. Indeed, white buyers will pay a premium price for a home in a white neighborhood, even when a similar home is available in a Black neighborhood. Thus, racial attitudes continue to influence our housing patterns.

While every neighborhood in America is unique, neighborhoods that combine racism and poverty share many of the same characteristics.

Poor, racially segregated neighborhoods lack many basic necessities. According to one study, “Political leaders have been more likely to cut spending and services in poor neighborhoods, in general, and African American neighborhoods, in particular, than in more affluent areas.”  As a result, poor Black neighborhoods tend to lack parks and other greenspaces, such as dedicated trails for walking or biking. They also lack recreation centers.

Primary-care doctors are difficult to locate in these neighborhoods. While many of these neighborhoods have free clinics, many clinics have closed. Sadly, the remaining clinics may not have access to the latest medical equipment. Dr. Hope Landrine, PhD., director of the Center for Health Disparities at East Carolina University writes, “physicians in healthcare settings with mostly Black patients are less likely to be board certified than are those in settings for White patients.”

The research is clear: Racism and poverty have created neighborhoods riddled with challenges for their residents.

The racism that created these neighborhoods harms the residents in a variety of ways. Some of the effects are obvious. Polluted air that carries carcinogens clearly puts residents in segregated neighborhoods at higher risk for cancer and asthma. Surprisingly, it also increases the risk of heart disease, diabetes, and hypertension, and pregnancy complications such as low birth weight.

The lack of medical providers in these neighborhoods makes it harder for neighborhood residents to get health care. Moreover, because the doctors in these neighborhoods are not as well trained, health care outcomes are worse. Dr. Landrine states, “The poor health care received by segregated Blacks contributes to disparities in diabetes, hypertension, [cardiovascular disease], asthma, adult and infant mortality, quality of treatment, cancer stage at diagnosis, obesity, and health behaviors such as low cancer screening, low smoking cessation, and poor diet.”

The lack of grocery stores is also problematic. Eating fruits and vegetables reduces the risk for many conditions, including obesity, heart disease, diabetes, and some cancers.  Each supermarket in a black neighborhood increases fruit and vegetable consumption for Black residents of that neighborhood by 32 percent.  However, because fresh produce is not readily available in poor Black neighborhoods, neighborhood residents do not receive their benefits. Moreover, it is difficult to exercise when there is no safe place to do so. The absence of greenspace, especially when combined with higher crime rates and a neighborhood environment that may be in disrepair due to lack of funding, contributes to a lack of exercise. As Dr. Landrine notes, “Given the increased access to fast food and lower access to supermarkets and recreational facilities in segregated Black neighborhoods, it is not surprising that BMI [body mass index] increases with segregation.”

Finally, but most significantly, the houses themselves present problems. Frequently, segregated neighborhoods feature older homes. These homes, perhaps due to age, perhaps due to lack of maintenance, expose the tenants to higher rates of nitrogen dioxide, carbon monoxide, polyvinyl chloride, and other indoor pollutants.  These irritants are a factor in increased risk for asthma, diabetes, heart disease, high blood pressure, cancer, and pregnancy complications.

All told, as sociologists Drs. David Williams and Chiquita Collins of Harvard and Johns Hopkins wrote in their seminal work Racial Residential Segregation:A Fundamental cause of Racial Disparites in Health, “Segregation is a fundamental cause of differences in health status between African Americans and whites because it shapes socioeconomic conditions for blacks not only at the individual and household levels but also at the neighborhood and community levels.”