U.S. border control agents repeatedly asked Muhammad Ali Jr. about his religion and lineage, even after he told them he was born in the U.S. Photo by Ken Karl/Coleman-Rayner.

The son of three-time heavyweight boxing champion Muhammad Ali was detained by U.S. border officials at a Florida airport earlier this month and repeatedly questioned about his faith in what a family friend says amounted to unconstitutional profiling.

Upon their return from a Black History Month event in Jamaica, 44-year-old Muhammad Ali Jr. and his mother, Khalilah Camacho-Ali, were pulled aside by border officials and separated at an immigration checkpoint at the Fort Lauderdale-Hollywood International Airport on Feb. 7, according to family friend and attorney Chris Mancini. Ali Jr. was reportedly held for about two hours, despite telling officials he was the boxing champion’s son and a natural-born U.S. citizen.

Mancini said Camacho-Ali was released soon after she showed a photo of herself and her ex-husband, the late heavyweight boxer, to border officials. However, Ali Jr., who confirmed his Muslim faith, did not have a photo of his world-famous dad on him at the time.

“From the way they were treated, from what was said to them, they can come up with no other rational explanation except they fell into a profiling program run by customs, which is designed to obtain information from anyone who says they’re a Muslim,” Mancini told ABC News in a phone interview. “It’s quite clear that what triggered his detention was his Arabic name and his religion.”

Officials repeatedly questioned Ali about his faith and lineage, asking “Are you Muslim?” and “Where did you get your name from?” the Florida attorney said. However, a spokesman for U.S. Customs and Border Protection maintained that the legendary boxer’s son was not detained because of his religion or “Arabic-sounding name.”

U.S. Customs and Border Protection stopped short of giving full details on the matter due to their privacy policy but said its officials don’t discriminate on the basis of religion, race, ethnicity or sexual orientation.

“Every day CBP officers process more than 1.2 million international travelers. We accomplish our mission with vigilance and in accordance with the law,” the agency said in a statement to Atlanta Black Star. “We treat all travelers with respect and sensitivity. Integrity is our cornerstone. We are guided by the highest ethical and moral principles.”

Mancini argued that the treatment experienced by Ali and his mother was directly linked to President Donald Trump’s recent travel ban, which permanently barred Syrian immigrants from entering the U.S. The controversial order also temporarily suspended travel from seven Muslim-majority nations. The Feb. 7 incident was the first time Ali and Camacho-Ali had been detained or questioned by officials in that manner, despite being frequent international travelers.

While the Florida attorney hinted that Ali and his family are considering taking legal action against the airport, family spokesperson Bob Gunnell said that’s not the case.

Mancini also has not responded to requests for further comment.

This incident is the latest in a string of complaints stemming from Trump’s controversial executive order. The Guardian reported that the prime minister of Norway was detained for almost an hour at Washington Dulles airport earlier this month and questioned about a trip he took to Iran three years ago. Meanwhile, acclaimed Australian children’s book author Mem Vox hinted that she might never return to the U.S. after being detained, questioned and insulted by border agents at the Los Angeles airport. 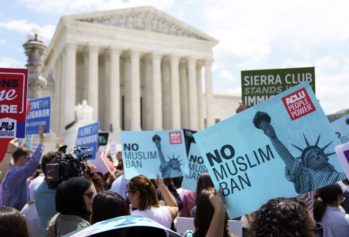