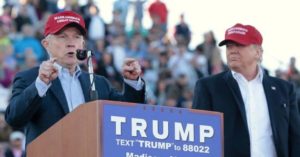 Sessions, a conservative lawmaker from Alabama, was also being considered for Secretary of Defense, The New York Times reported. Officials on Trump’s transition team struggled throughout the week to decide which position would best suit the senator.

As a former prosecutor elected to the U.S. Senate back in 1996, Sessions was known for his conservative resistance on issues like immigration reform and abolishing mandatory minimum prison sentences. He’s become a champion of upholding Republican ideals over the years, but Democrats and civil rights organizations alike aren’t too fond of him.

Due to a series of bigoted remarks he made in the past, Sessions was once deemed too racist to serve as a federal U.S. judge. He was nominated for a judgeship by Pres. Ronald Reagan in 1986 but was ultimately rejected because of his racially charged comments.

Sessions reportedly referred to the NAACP, the Southern Christian Leadership Conference and other prominent civil rights groups as “un-American” and “Communist inspired,” according to The New York Times. Black federal prosecutor Thomas H. Figures even testified that Sessions called him “boy” and said he had no issue with the Ku Klux Klan until he realized they smoked weed.

Sessions asserted the KKK comment was simply a “joke.”

The Alabama senator also was accused of speaking unfavorably about the Voting Rights Act and the strict oversight it has placed on several Southern states.

J. Gerald Hebert, director of the Voting Rights and Redistricting Program at the Campaign Legal Center in Washington, testified against Sessions at the Senate Judiciary Committee hearing in 1986, as well, stating that the senator had suggested a white lawyer working for a Black client was a “race traitor.” Hebert worked alongside Sessions for a few months in Alabama as he worked on voting-rights cases for the Department of Justice’s Civil Rights Division, the Huffington Post reported.

Sessions also allegedly used the n-word to refer to the only Black commissioner in Mobile, Alabama, at the time.

But officials on Trump’s transition team have seemingly turned a blind eye to the racist comments, as the senator was still hand-picked to serve in Trump’s Cabinet. To this day, Sessions vehemently denies the racism claims that have dogged his career for decades.

“I am not the Jeff Sessions my detractors have tried to create,” he told The Washington Post. “I am not a racist. I am not insensitive to Blacks.”

“Racism is totally unacceptable in America,” Sessions said earlier this year. “Everybody needs to be treated fairly and objectively.”