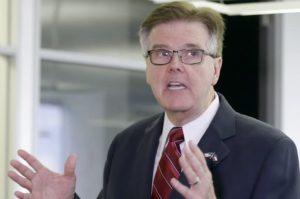 The Texas lieutenant governor who referred to Black Lives Matter activists as “hypocrites” following the deadly police ambush in Dallas is now calling for an investigation into the anti-police brutality movement.

During an interview with CNN Tuesday, Lt. Gov. Dan Patrick expressed his support for GOP presidential nominee Donald Trump, who hinted that, if elected, he would have his attorney general look into the social activist group.

“We know we have a distrust in the Black community of police,” Patrick told CNN. “We know that there are some police officers who need to be replaced. And police forces want to remove those people as well. But before we can sit down at a table and have unity, we have to stop having protesters chanting, ‘Kill the cops.’ ”

The lieutenant governor’s comments come on the heels of two deadly attacks on police — one in Dallas and the most recent one in Baton Rouge, Louisiana.

Patrick has since voiced his criticisms of the Black Lives Matter movement, calling the activists “hypocrites” for assuming protection from the very police they were protesting. Five officers died in the Dallas ambush that night, before which demonstrators were peacefully marching through the city’s streets to demand justice for slain Black men Alton Sterling and Philando Castile. Since the deadly shootings, Black Lives Matter has denounced the killings of the officers.

The lieutenant governor has also criticized President Barack Obama for failing to illuminate the White House in blue to honor the slain policemen, Politico reports. According to Patrick, Obama hasn’t done enough to show his “unequivocal” support for the nation’s law enforcement personnel.

“It’s inherently racist because, number one, it divides us,” the former mayor said. “… All lives matter: White lives, Black lives, all lives. Number two: Black Lives Matter never protests when every 14 hours somebody is killed in Chicago, probably 70-80 percent of the time (by) a Black person. Where are they then? Where are they when a young Black child is killed?”

Sheriff Clarke sat down with CNN’s Don Lemon Sunday to discuss the recent police shootings in Dallas and Baton Rouge, in which the sheriff blamed Black Lives Matter’s “anti-police” rhetoric for fueling the deadly attacks on cops.

“This anti-cop sentiment from this hateful ideology called Black Lives Matter has fueled this rage against the American police officer,” he said. ” I predicted this [the police ambushes] two years ago. This anti-police rhetoric sweeping the country has turned out some hateful things inside of people.”

In light of the bellyaching and discontent from Black Lives Matter critics, the White House recently denied a petition to formally designate the social activist group as a terrorist organization. According to “We the People” staff, the White House doesn’t have a hand in designating domestic terror groups, nor does the federal government “generate a list of domestic terror organizations.”

“[T]herefore, we are not able to address the formal request of your petition,” their response stated. “We encourage you to engage with your community in the ongoing discussion of how we can better build trust and safety in our communities.”

The petition received over 100,000 signatures in a matter of days.