Scholars in various academic circles are reexamining the idea that the Irish were enslaved in the Americas.

In academic discussions and debates that try to diminish how  racism and slavery impacted African-Americans in the United States, many whites try to use this myth of Irish slavery as a rebuttal.

In recent months, memes about Irish slavery have been debunked by Irish historian Liam Hogan via his Medium page. He has effectively torn down the idea that the Irish were involved in the worst forms of chattel slavery in the New World by using historical facts.

For example, back in 2013, a member of the far right Tea Party tweeted this  racist meme: However, Hogan and historian Matthew C. Reilly debunked this photo. Reilly has done extensive research on the “poor white” community of Barbados and discovered that this photo comes from 1908. None of the men in the photo have Irish surnames and they may be of African and European ancestry.

“Photograph locally known as “The ‘Redlegs’ of Barbados.” Pictured are fishermen residents of Bath in the parish of St. John taken in 1908. Photo courtesy of Mr. Richard Goddard.”

The fact is that the Irish were indentured servants, and indentured servitude was nothing compared to the harshness and brutality of Black slavery. Indentured servitude was no picnic, but it was a form of debt reimbursement with a set time and a contract agreed on by both parties. Many people agreed to these terms in order to travel to the new world and start over. In the 17th century, the East India Company was notorious for providing contracts to the desperate to get cheap labor for the burgeoning colonies.

According to PBS, “Servants typically worked four to seven years in exchange for passage, room, board, lodging and freedom dues. While the life of an indentured servant was harsh and restrictive, it wasn’t slavery.”

There were laws in place to protect the rights of the indentured. And at the end of their contract, the newly freed servants may have gained at least 25 acres of land, a year’s worth of corn, arms, a cow and new clothes. In many cases, the former Irish indentured servants would buy enslaved Africans to work their land. That was the case in Louisiana. “This piece of anti-slavery propaganda during the American Civil War was aimed at a Northern white audience. These enslaved children were “the offspring of white fathers through two or three generations.” The fact that many slave owners in Louisiana were of Irish descent only makes this appropriation more reprehensible. In my review of Irish surnames and slave-ownership I found that 159 different Irish surnames were represented among slave owners in Louisiana in 1850.”

These unfounded theories about Irish slavery have been used by conservatives and suspected racists to counter and attack the work of the Black Lives Matter movement.

“Irish slave memes are frequently used to derail conversations about slavery and racism,” writes Al Jazeera’s Norma Costello. “When they proclaim that ‘Irish slaves were treated worse than any other race in the US,’ they attempt to diminish the history of the slave trade, the popular Black Lives Matter movement and calls for reparations for slavery in the US and the Caribbean.”

One of the most recent memes went viral during Black History Month and has been proven inaccurate by Hogan: 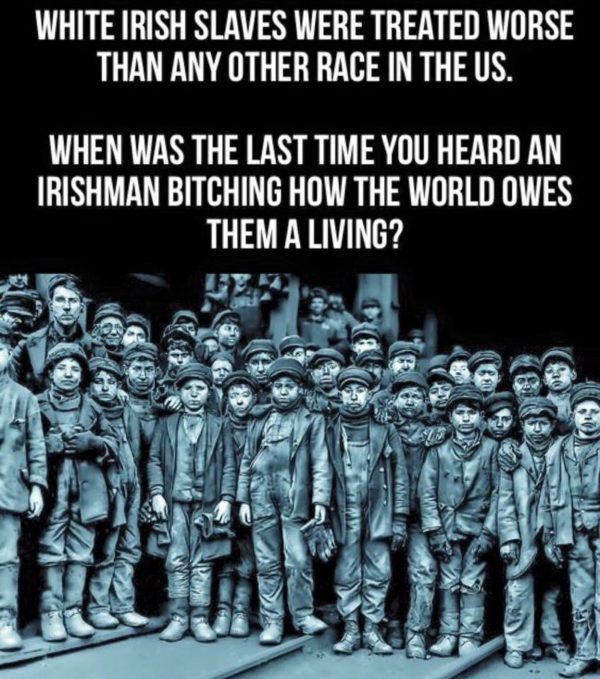 Again, this photo was taken in the 20th century. It depicts breaker boys working in Ewen Breaker of Pennsylvania Coal Co., South Pittston, Pennsylvania. It was taken by Lewis Hine — investigative photographer for the National Child Labor Committee —  in January 1911.

In an interview with Al Jazeera, Hogan states that popular online articles about Irish slavery is a revisionist and wrong interpretation of history:

“These articles have created an Irish slave trade timeline, ostensibly a fantasy, which runs from 1612 to 1839,” he explained. “This is to make it appear that there was a concurrent transatlantic slave trade of Irish slaves that historians have covered up because of liberal bias.”

The Irish and many Catholic immigrants in America did not have it easy, because they weren’t considered white in the first place. They were not Protestant, and they did not come from western Europe. To say that the Irish endured chattel slavery is asinine.  As Black people moved to northern industrialized cities, the Irish historically tormented Black people because they often competed for the same jobs. The Irish and Black people also faced the same oppression and discrimination.

It has been nearly two years since the inception of the Black Lives Matter movement. Drastic measures have been taken to improve a racially unbalanced justice system that has disproportionately imprisoned Black people. Racist and factually inaccurate memes won’t stop this movement.

13 thoughts on “Myth Busted: Scholars Fire Back Against Memes Pushing Narrative of Irish Slaves in the Americas”