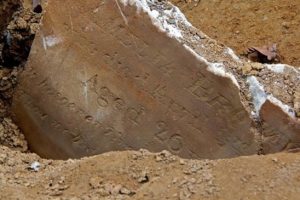 A stone unearthed at the old Mother Bethel burial site records the death of Amelia Brown, who died April 3, 1819, and the inscription: “Whosoever lives & believeth in me thou we be dead yet shall we live.” NBC Philadelphia

Another African burial ground has been discovered in New York, this time in East Harlem, underscoring the fact that there are numerous burial sites, important historical symbols of Black people who are neglected and forgotten.

As The New York Times reported, community activists had insisted for nearly 10 years that an antebellum burial site existed underneath the 126th Street Bus Depot in Upper Manhattan.  Documents show the site once was a Dutch Reformed churchyard where Black people were buried from the 17th through the 19th centuries.  Last summer, archaeologists discovered over 140 bones and bone fragments, including an intact skull that likely belonged to a middle-aged African woman.

“We’re very excited,” said speaker Mark-Viverito to the Times. “This is a way of affirming a part of Manhattan history that has been overlooked.”

The speaker also said that a fitting memorial would be erected to honor the burial ground, in consultation with the community.

According to A. Michael Pappalardo, an archaeologist at AKRF, which performed the excavation work for the city, the bones were found in soil outside the known boundaries of the cemetery.

“No intact burials were encountered or disturbed,” he added, noting that the remains were “disarticulated,” or separated at the joints.

Although this bus depot is reportedly a candidate for development, officials maintain that a memorial must be included on the site in the future. This news comes 25 years after the discovery of the African Burial Ground in lower Manhattan.  According to the National Park Service, free and enslaved Africans were buried in the 6.6-acre burial ground outside the settlement of New Amsterdam, which later became known as New York.  As a result of landfill and development, the burial ground was lost, rediscovered in 1991 amid plans to construct a federal office building.

Although 419 Africans were found at that site, 40 percent of them children, it is believed that as many as 15,000 were buried there — in the largest colonial-era cemetery for Black people and New York’s earliest known African-American cemetery. The burial site is now known as the African Burial Ground National Monument.

But these are not the only examples of forgotten, neglected, abandoned and newly rediscovered resting places of the ancestors.  In Philadelphia, for example, there is the Mt. Moriah Cemetery, in the Southwest section of the city, and the Mother Bethel Burying Grounds in South Philadelphia, as the Philadelphia Tribune reported.  The latter, part of Mother Bethel A.M.E. Church — the nation’s oldest Black church — dates from the late 18th century.

As many as 3,00 people are buried there, as NewsWorks reported, from a time when cemeteries would not accept the remains of Black people. One gravestone reads: “Amelia Brown, 1819, Aged 26 years,” with this epitaph: “Whosoever live and believeth in me, though we be dead, yet shall we live.” The property had been long abandoned, sold to the city and left vacant until a playground was built.  Meanwhile, nothing had been left to mark the burial site.

“It gives us a chance to really do right,” said Rev. Mark Tyler, head of Mother Bethel A.M.E. to NewsWorks.  “Unfortunately, like a lot of churches that start cemeteries — because of the pressing financial issues of keeping a church going — it ran on really hard times. It’s not one of our shining examples that we’re proud of. This gives us a chance to redo history a second time.”

Meanwhile, as Vice News reported this month, in the Gullah-Geechee communities of South Carolina and Georgia, Black people are being forcibly uprooted from the ancestral land they have known since slavery to make way for white developers.  Developers are using legal loopholes to seize the communally owned Black land, which is highly-coveted waterfront property. The first such community to witness this transformation was Hilton Head Island, which draws 2 million tourists per year and is a top vacation spot in the nation.

“Gullah burial grounds dating back to the days of slavery are now the backyards of million-dollar condos, in opulent gated communities that new moguls fondly call ‘plantations,’ ” as Vice News reported.