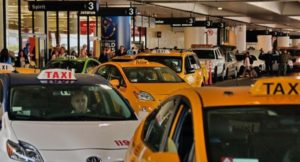 The committee that oversees trade and tourism has suggested banning taxi drivers who discriminate against Black passengers from working the airport — also known as LAX — route for a year.

The idea was proposed by City Councilman Bob Blumenfield, who also called on the police officers to continue their undercover operation.

“The last thing we want is for our city to have any part in discrimination,” said Blumenfield, in an LA Times article.

The city council will take a vote on the policy in a week. However, the city council was not only motivated by the findings of the Black officers’ undercover operation. ESPN analyst Doug Glanville wrote an article in The Atlantic last fall detailing how he was discriminated against by a LAX cab driver.

According to Glanville last September, he and a white co-worker hailed a United Taxi at LAX. They were putting their bags in the car, but the driver’s demeanor changed when he saw Glanville. The driver refused to take them downtown and told them to catch a bus, according to Glanville. He then witnessed the driver pick up a white passenger. The encounter was captured on video.

Glanville filed a complaint with the city because he was concerned about lax enforcement of the law. Airport officials reviewed video footage of the encounter and substantiated Glanville’s claim.

“It’s one thing to be blown off on a snowy day on downtown Chicago, and you’re hailing outside,” said Glanville. “It’s another to be in a controlled environment, like an airport, where there are a thousand cameras everywhere. Clearly, he had to feel comfortable doing this.”

According to Los Angeles taxi administrator Tom Drischler, the driver said there was no racial aspect to his behavior. He claimed he was confused about which passenger was first in line. The driver was suspended for two weeks and barred from working LAX for a year for his actions.

Drischler said his investigation had convinced him that taxicab drivers discriminating against Black passengers was “a systemic problem that needs to be dealt with as strongly as possible.”

Even famous Black men have complained about not being able to get a cab. TV weatherman Al Roker filed a complaint last year after a cab driver ignored Roker and his son, only to pick up a white passenger down the street. “This happens to folks of color every day,” said Roker in a tweet.

According to The Huffington Post, the cab driver recently plead guilty to a service refusal violation and was fined $500.