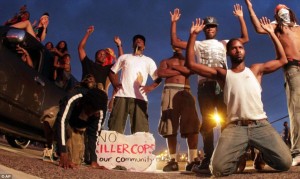 Recently, FBI Director James Comey has promoted a theory that increased scrutiny of the police has caused a spike in crime. Although he was not the first to claim the existence of the “Ferguson effect,” and apparently has no proof of its existence, it hasn’t stopped him from supporting the theory. The White House has distanced itself from his remarks.

Speaking in Chicago on Monday at the annual convention of the International Association of Chiefs of Police, Comey conceded he was uncertain that the “Ferguson effect”—which resulted from the fatal police shooting of Michael Brown, 18, an unarmed young Black man—led to a retreat by law enforcement and less aggressive policing.  Yet, as the Guardian reported, Comey said this was “common sense.”

“The question is, are these kinds of things changing police behavior around the country?” said the FBI chief. “The honest answer is I don’t know for sure whether that’s the case … but I do have a strong sense.”

The remarks reflected a reiteration of a statement Comey made at the University of Chicago Law School on Friday, when he promoted the controversial theory and surmised whether cell phone cameras were having an impact on police behavior and causing them to avoid daily interactions with the public.

“That wind is surely changing behavior, common sense tells me,” he said. “In today’s YouTube world, are officers reluctant to get out of their cars and do the work that controls violent crime? Are officers answering 911 calls but avoiding the informal contact that keeps bad guys from standing around, especially with guns?”

Comey said that although he “didn’t know” whether police inaction is responsible for the increase in crime, he has “a strong sense that some part of the explanation is a chill wind blowing through American law enforcement over the last year.”

The comments received sharp rebuke from the Justice Department, according to the New York Times, as a number of officials reportedly “privately fumed at Mr. Comey’s suggestion.”  Criminal justice experts and activists also disagree with the theory. The Sentencing Project has published findings demonstrating that the rise in homicides in St. Louis predated the death of Michael Brown and the resulting protest movement, and the Vera Institute of Justice said there was no “compelling evidence that there has been a pervasive increase in homicides that is substantively meaningful.”

Further, the White House is distancing itself from Comey’s remarks.  Josh Earnest, the White House press secretary, said the evidence available “does not support the notion that law enforcement officers around the country are shying away from fulfilling their responsibilities”.  Without directly disagreeing with Comey, Earnest offered that law enforcement leaders have indicated otherwise.

“The evidence we’ve seen so far doesn’t support the contention that law enforcement officials are somehow shirking their responsibility, and in fact you’ve seen law enforcement leaders across the country indicating that’s not what’s taking place,” Earnest said, calling officers “dedicated public servants, who on a daily basis are putting their lives on the line to serve and protect the communities that they’re assigned to.”

Comey’s recent remarks are in stark contrast to his address earlier this year on racism in law enforcement. In February, in a speech at Georgetown University, the FBI head spoke of “hard truths” in this country, of the history of discrimination in law enforcement, the struggles young Black men face, and the role of  “unconscious bias,” which can cause white people to “react differently to a white face than a Black face.”  Comey was hailed for the surprising truths he revealed in that speech, in which he reflected on the troubled past of his own bureau under J. Edgar Hoover and the monitoring of Black leaders such as Dr. Martin Luther King, Jr.

Speaking in Cleveland in October, Comey warned about the divide between police and communities of color, and violence against men of color.

“It’s a problem the rest of the country could easily drive around because it’s happening to those people in those neighborhoods,” Comey said, insisting that police must “own the history” of how Black people have been treated by law enforcement. At the same time, he offered that Black communities need police to weed out violent predators.  “We need police in these neighborhoods to save those lives because those lives matter. These are Americans dying in our streets, so we are needed there.”

The director’s reversal on the issue now places him in the ranks of those such as Chicago mayor Rahm Emanuel, who has suggested the “Ferguson effect” is real and blames the spike in crime to police scrutiny. This represents a departure from Comey’s earlier statements on racism in the criminal justice system, and leaves the public wondering what it should do, given the evidence of police brutality.