The protests started at the University of the Witwatersand over a proposed 10.5% increase in tuition fees. For days, hundreds of demonstrators blocked entrances to the university, known as Wits, forcing administration to cancel lectures and eventually suspending the fee increase.

Wits University has taken a deliberate and anti-progressive decision to once more entrench the financial exclusion of poor students by exorbitantly increasing the upfront fee payment in particular and fees in general. There is currently an upward trend in fees at all universities around the country and NSFAS is not increasing at the same rate as Wits fees. Wits proposed fee increases are simply unjust and unjustifiable. One must then ask, how much longer is this going to go on for? How long is Wits University going to continue to exclude poor students?

Witwatersrand student, Thabiso Bhengu, added, “The protest was meant to disrupt and it did succeed in creating a national ripple effect because of that. The protest is about refusing fee university increment ensuring that we can move towards a direction of free education.”

Proposed tuition fee hikes of between 10% and 12% sparked protests to universities throughout the country. Institutions, such as Tshwane University of Technology and the University of Pretoria, proposed increases of 17% and 40 %, respectively.

The protests against fees follow on from demonstrations in September at the University of KwaZulu-Natal’s Westville over an increase in the pass mark required for financial aid students. Administration at UKZN changed funding requirements from a 50 percent pass rate to 70 percent.

The recent proposed increased was the latest frustration of millennial South Africans about the state of the country. Students have warned that higher fees will force out poorer Black students, urging instead for institutions to provide a free education.

“We joined because we as Black students are denied the right for education,we are less privileged compared to other white students. We cannot afford all this money,” said Am Sibongiseni Gwina, a student at Nelson Mandela Metropolitan University.

Earlier today, a group calling itself the National Shutdown Collective issued this statement:

Memorandum to Dept and Min of Higher Education & Training from the National Shut Down Coalition. #NationalShutDown pic.twitter.com/37xjg8P8A7

In response to the protests, students have experienced the internet and water being shut off on campus, as they attempt to study for exams scheduled for next week.

Urgent: UWC must get water. Uni has shut off the water supply. Making them more vulnerable to teargas and dehydration. Please help.

On Tuesday, the protests continued to intensify with arrest being documented on various hashtags such as #FeesMustFall and #NationalShutdownDay. South African police arrested 23 students after students barricaded themselves behind entrances to the University of Cape Town.

1984 and 2015. We are still seeing similar images in this country but different bodies.who is next? #uctfeesmustfall pic.twitter.com/nyswV6WsGb

Hey @helenzille this still happened under your watch. What are you doing about it? #FeesMustFall pic.twitter.com/7Zxdcvs9P1

Tear gas prevents people from a building that is support to protect/represent them. #NationalShutDown #feesmustfall pic.twitter.com/9DRhxorScd

Singing the national anthem with the sound of stun grenades and tazers in the background #FeesMustFall pic.twitter.com/TXkrYvTfZH

“Students at the university currently known as Rhodes joined the protest because of exorbitant tuition fees,” said student, Khanyisa Tembeka Nomoyi. “This essentially speaks to the greater decolonization project, where institutions of higher learning have to recognize the change in the country’s demographics and actually start catering for Black students.”

After the wave of protests, the higher education minister, Blade Nzimande, announced a 6% cap on fee rises. 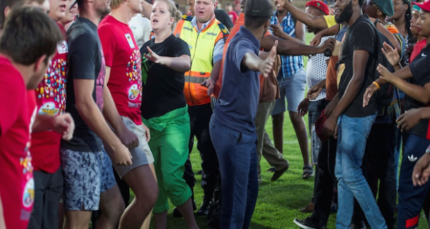