South Carolina came one step closer to removing the Confederate battle flag from the capitol grounds, as the state House of Representatives voted early on Thursday, July 9 to take down a symbol of slavery, segregation and white terrorism. Passage of the bill was precipitated by the racially-motivated mass murder at Emanuel AME Church in Charleston, reigniting a debate throughout the south on the flag, and calls for its removal nationwide. However, despite the promise of an America without a Confederate flag, racism lives on.

In a 94-20 vote—more than the two-thirds required—the legislative chamber passed the bill. Two days earlier, the state Senate had voted 36-3 in favor of removing the flag. The bill now makes its way to the desk of Gov. Nikki Haley, who has promised to sign it into law.

“Today, as the Senate did before them, the House of Representatives has served the State of South Carolina and her people with great dignity,” Haley said in a statement, as CNN reported. “It is a new day in South Carolina, a day we can all be proud of, a day that truly brings us all together as we continue to heal, as one people and one state.”

The debate over the bill was stalled with dozens of amendments.

“I cannot believe that we do not have the heart in this body to do something meaningful, such as take a symbol of hate off these grounds on Friday,” cried Republican State Rep. Jenny Horne, a descendant of Confederate President Jefferson Davis. “For the widow of Sen. Pinckney and his two young daughters, [not removing the flag] would be adding insult to injury and I will not be a part of it.”

The vote comes three weeks after the Charleston massacre, in which Dylann Roof, a 21-year old white supremacist with neo-Confederate ties, gunned down nine members of the Emanuel AME Church in Charleston. State Sen. Clementa Pinckney—leader of the Black church, the oldest in the South—was among those murdered in the terrorist act. That Pinckney was a lawmaker had an impact on his Republican colleagues, who up to this point offered both tacit and vocal approval for the so-called “Stars and Bars.”

As early as October of last year, Haley defended the flying of the flag because “not a single CEO” complained about it.

“What I can tell you is over the last three and a half years, I spent a lot of my days on the phones with CEOs and recruiting jobs to this state,” Haley said, as reported in Salon. “I can honestly say I have not had one conversation with a single CEO about the Confederate flag.”

Faced with public shaming and economic pressure, states of the former Confederacy are forced with the prospect of reassessing their Confederate flags, emblems, memorials and license plates, and as a result, have a fighting chance of entering the twenty-first century. However, 150 years after the end of the Civil War, the south has not given up on the Confederacy, and America has not divested itself of racial injustice.

As Sally Kohn suggested on CNN.com, while it is easy to take down the flag, it is far more difficult to dismantle institutional racism, the structural bias that is present everywhere in society.

According to the National Urban League’s State of Black America report, people of color continue to be plagued by inequality. The civil rights organization established an Equality Index to measure how Blacks and Latinos fare with regard to whites. The Black-White Equality Index is 72.2 percent, and the Hispanic-White Equality Index is 77.7 percent, meaning that African-Americans and Latinos are roughly doing three-quarters as well as whites, due to entrenched policies and practices of discrimination.

Further, Blacks fare worse in economics, with an index of 55.8 percent, reflecting a Black unemployment rate nearly three times higher than that of whites and the economic ground Black America lost during the Great Recession.

In addition, according to the report, Black America suffers from a justice crisis, with an Equality Index of 60.6 percent. Racial disparities in the justice system are reflected in the killing of Blacks by police, and the new Jim Crow policies that target and fill the prisons with people of color. Similarly, Black and Latino communities lag behind white America in education and other areas,  reflecting the notion that Black people were once regarded as three-fifths of a person.

Meanwhile, although many of the conservative white lawmakers who control the south have seen the light on the Confederate flag, it remains to be seen whether they will divest themselves of the white supremacist policies that have kept them in office.

Hate groups such as the Council of Conservative Citizens, which inspired Dylann Roof, still have a home in the Republican Party. States such as Texas have whitewashed their textbooks to delete references to slavery and Jim Crow segregation. On the 50th anniversary of the Voting Rights Act, voting rights are under siege, as the Supreme Court has gutted the landmark legislation, and state legislators have enacted voter ID requirements reminiscent of the poll taxes and literacy tests of the Jim Crow era. And while the demographics of the South are shifting, with more Latino immigrants, and Black and white transplants from the North, the racial gerrymandering of electoral districts has kept reactionary conservatives in power.

So, while it is encouraging that the Confederate flag is making a long overdue departure from the Palmetto State and elsewhere, America still has a racism problem that shows no signs of fading. 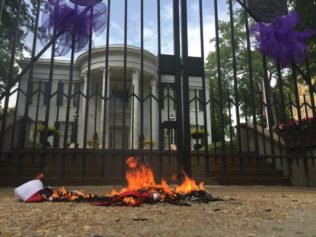