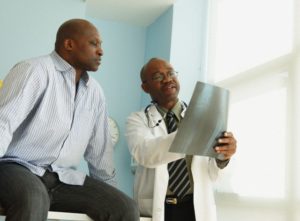 This question isn’t necessarily a new one, but it’s one that has gone a long time without a definitive answer and that may be because the answer is far more complex than a “yes” or “no.”

There is no irrefutable evidence, for now, that getting more Black physicians into the medical field will help combat the many racial disparities that exist for Black patients.

What it could do, according to one medical expert, is provide many Black patients with a doctor who makes them feel more comfortable, understands their racial plights and can give them the diagnoses and treatments that may have been overlooked otherwise.

The Black community has long been plagued with a set of disparities in health that leave them losing battles with cancer, diabetes and heart conditions far more often than their white counterparts.

This trend is most typically traced to the impact that socioeconomic status can have on patients and mentally and psychologically taxing effects of racial discrimination.

Even the history of Black culture and an analysis of the usual diet among Black families have fallen under the microscope when it comes to solving why the Black community is faced with so many disparities in health.

But have we been overlooking yet another key piece of the puzzle?

“The usual explanations for these health disparities — poverty, poor access to medical care and unhealthy lifestyle choices, to name a few — are certainly valid, but the longer I’ve practiced medicine, the more I’ve come to appreciate a factor that is less obvious: the dearth of black doctors,” Tweedy wrote in a post for the New York Times. “Only around 5 percent of practicing physicians are black, compared with more than 13 percent of Americans overall.”

To some, it may seem like an insignificant fact.

Physicians of all backgrounds and all races have sworn to give their best efforts to any and every patient they see.

The differences, however, lie in some of the implicit biases that exist both on behalf of the Black patient and the non-Black doctor.

“As a general rule, black patients are more likely to feel comfortable with black doctors,” Tweedy continued. “Studies have shown that they are more likely to seek them out for treatment, and to report higher satisfaction with their care. In addition, more black doctors practice in high-poverty communities of color, where physicians are relatively scarce.”

Tweedy says he’s seen this bias constantly manifest itself throughout his years of time spent in the medical field.

Black patients come in needing treatment and will insist that they see a Black doctor.

“Much of this is rooted in a dark history of experimentation on black people without their consent (the four-decade-long Tuskegee syphilis study is the most notorious modern-day example). Too often, however, this mistrust is to the patient’s detriment,” Tweedy explains.

As it turns out, the lack of trust for doctors that aren’t Black doesn’t just prevent some patients from wanting to see them, but it also causes them to severely discount their medical advice.

There were fears that prescribed medicines would only exacerbate problems, and patients didn’t feel comfortable discussing every aspect of their medical history or general lives with the doctors.

It caused some patients’ condition to quickly deteriorate despite the fact that the illness could have been cured much earlier.

Unfortunately, Tweedy says the current landscape for Black patients is only giving them more reason not to trust medical practitioners.

“Black people have often fared poorly in their interactions with the mental health care system,” he continues. “For example, they are nearly half as likely as whites to receive treatment for diagnosed mental health disorders of comparable severity. When black patients do receive treatment, it is far more likely to occur in an emergency room or psychiatric hospital than it is for whites, and less likely to be in the calmer office-based setting, where longer-term treatment can take place.”

Perhaps the biggest case Tweedy makes for Black doctors, however, has to do with the sheer lack of physicians in impoverished communities that need the most medical attention.

For more than 30 years, he says, researchers actually found that it is far more common for Black medical practitioners of all backgrounds to work in “disproportionately poor and minority” neighborhoods — many of them opting for clinics rather than private offices.

The answer still isn’t a concrete yes or a definitive no, but it is a pretty strong “probably.”