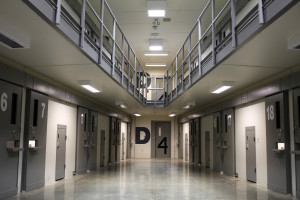 The class action lawsuit filed against hundreds of guards in the Illinois prison system details the sexual and psychological abuse inflicted on mostly Black men by guards who clearly feel they are above the law.

The suit filed this week by Demetrius Ross on behalf of himself and other inmates at several Illinois prisons confirms our worst fears about what happens to Black men and women in these prisons when the doors are slammed shut and inmates are vulnerable to the debased whims of corrections officers.

Ross’ suit details “shakedowns” that occurred last April at the Illinois River Correctional Facility in Canton, Illinois, that were intended to sexually humiliate inmates. Though the suit doesn’t mention race, more than half of the inmates at Illinois River were Black, according to a 2012 report by Illinois Department of Corrections, while 24 percent were white and 20 percent Hispanic.

As for the guards, a report by the John Howard Association of Illinois, a prison reform advocacy group, said Illinois River had no Black or Hispanic guards despite the fact that Black and Hispanic inmates made up 76 percent of the prison population.

Illinois River is a medium security male facility with a population of 2,000 inmates located approximately three and a half hours southwest of Chicago.

During the shakedown, according to the suit, the guards (who Ross refers to as the “Orange Crush”) “beat, sexually humiliated, and otherwise abused Mr. Ross (and hundreds of other prisoners), destroyed his property, and otherwise gratuitously inflicted punishment for the sole purpose of causing humiliation and needless pain.”

As an example of the torture, the inmates had to endure a strip search in front of female officers, touch their genitals and spread their buttocks, and then use the same hand to open their mouths. They would also have to march from their housing units to the gym at the facility with their heads on the backs of the prisoners ahead of them in line so that one man’s genitals were in direct contact with the next man’s buttocks. If they broke the formation, they would be violently attacked by the guards, according to the suit. The guards called this “Nuts to Butts.”

During one of these incidents, the defendant had his head slammed down so violently that his glasses broke and fell from his face, causing him to suffer from “extreme dizziness and lightheadedness.”

“Officers then shoved their batons in between each prisoner’s legs and jerked upwards, forcing the prisoner to straighten his legs while keeping his back bent over at a 90-degree angle onto the prisoner in front of him,” the suit alleges.

The suit seeks damages for Ross’ injuries and those of other similarly abused prisoners, in addition to an injunction prohibiting the defendants from inflicting such abuse during future searches.

In addition to the guards, the suit also names the wardens at these facilities.

This lawsuit comes a month after a story in The Guardian revealed that Chicago police operated a secret CIA-style site in Chicago called Homan Square where people were brought before charges were even filed against them so that they could be beaten during brutal interrogations that last for hours. A Black man even died at the site.

Protesters have been holding demonstrations outside the Homan Square site to demand that the Chicago Police Department shut it down.

Fears about the possible abuses occurring in U.S. prisons is why Juan Mendez, the U.N.’s special rapporteur on torture and other cruel, inhumane or degrading treatment or punishment, has been trying for the past two years to gain access to federal prisons in New York and Colorado, as well as state prisons in California and Louisiana, among other states. He said he has been trying to go through the U.S. State Department, but he still hasn’t been given access after two years.

“It’s simply outrageous that it’s taking such a long time to provide access to American detention facilities,” Jamil Dakwar, head of human rights at the ACLU, wrote in an email to the AFP news agency. “This begs the question: is the United States hiding something?”

These complaints from Mendez came in the same week that the U.S. was charging Venezuelan officials with committing violence against anti-government protesters—revealing the depth of U.S. hypocrisy on these human rights issues.

And it all cames at the same time as Mendez released a report lashing the United States for being the only country in the world that continues the cruel and inhumane practice of imprisoning children for life without the possibility of release. Because of the unique vulnerabilities of children, Méndez dedicated an entire 21-page report to their status in the world and singled out the United States for its unusually cruel treatment of youths.