When Charlie Sifford was young, he met Jackie Robinson, who broke the Major League Baseball race barrier. Sifford recounted in his autobiography, “Just Let Me Play,” that Robinson “asked me if I was a quitter, I told him no. He said, ‘If you’re not a quitter, you’re probably going to experience some things that will make you want to quit.’”

Sifford did not quit. He endured the hatred and went on to become the first Black on the PGA Tour.

At 92, Sifford died Tuesday night after a stroke outside of Cleveland. He leaves behind a legacy of determination, talent and perseverance.

Known for playing with a cigar in his mouth, Sifford won six National Negro Opens before successfully challenging the PGA’s “Caucasian only” rule—despite harassment and death threats—in 1960. He won his first PGA title in 1967 and another in 1969.

“By his courage, Dr. Sifford inspired others to follow their dreams. The PGA of America extends its thoughts and prayers to Dr. Sifford’s family. Golf was fortunate to have had this exceptional American in our midst,” said PGA of America President Derek Sprague.

Tiger Woods, the only Black on the PGA Tour, has credited Sifford and others for paving the way for his place in professional golf. 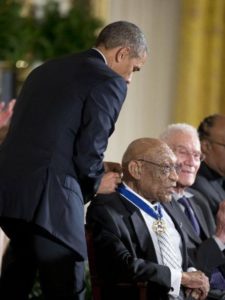 In November, Sifford received the Presidential Medal of Freedom from President Barack Obama, joining Jack Nicklaus and Arnold Palmer as the only golfers to receive the highest honor for an American civilian.

“Charles Sifford is not only a world-class athlete, he is a civil rights leader who risked his safety for what is right,” U.S. Sen. Sherrod Brown (D-Ohio) said. “Despite discrimination and threats of violence, Mr. Sifford broke barriers and laid important groundwork for future generations. He has earned this great honor.”

Sifford was born in Charlotte in 1922. In 2004, he was inducted into the World Golf Hall of Fame.