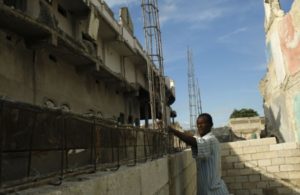 Where once many thousands of people made tattered tents and makeshift shelters their home, now massive concrete shells and cranes stand tall amidst the rubble. Returning to Haiti, along with much of the world’s major media, for the fifth anniversary of the earthquake that killed more than 200,000 and displaced 1.5 million, it’s impossible not to see some signs that Haiti is in fact “moving forward.” The large camps of internally displaced persons, the most visible sign of the quake’s lasting impact, have for the most part been cleared, though certainly some remain. But beneath the veneer of progress, a more disturbing reality is apparent.

Eighteen kilometers north on the dusty hillsides overlooking the sea is Canaan, an informal city now home to hundreds of thousands of people and, according to the State Department, on its way to becoming the second-largest city in Haiti.

“It’s a living hell,” says Alexis, one of the area’s residents, as we sit overlooking a new $18 million sports complex built by the Olympic Committee for Haitian national teams at the foot of the hills. “I’ll stay here because I can’t afford to go anywhere else,” she adds.

Like many others here, Alexis received rental support from an NGO to move out of the camps in Haiti’s capital, but when it ran out, she was displaced all over again. While no longer facing the constant threat of eviction, Alexis faces a new set of problems: there are no government services in Canaan, water is scarce, employment even more so.

Five years ago, it took just seconds for hundreds of thousands of homes to crumble and crack. More than a million Haitians took to the streets, sleeping under the stars wherever space allowed, taking comfort that the only thing that could still fall was the sky. Almost just as quickly, the global aid-industrial complex was set in motion; the first no-bid contracts for groups responding to the crisis were awarded just days after. In a few months, the international community would come together, pledging $10 billion in relief and promising that this time would be different. No more of the failed policies of the past, in which the flow of foreign aid undermined the Haitian government; this time Haiti would “build back better.”

But after five years and billions of dollars, just 9,000 new homes have been built.

Read More at The Nation