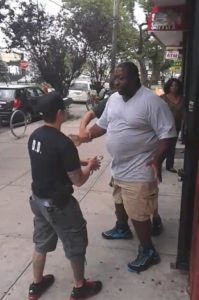 Eric Garner’s family members have turned their pain into poetry with the release of a poignant hip hop song, “This Ends Today,” that features performances by his daughter Erica Garner and his brother Steven Flagg.

The nearly four-minute song powerfully captures the drama and gut-wrenching emotion of Garner’s deadly encounter with New York police officers in Staten Island on July 17. The song starts out with the words Garner said as the cops tried to put him in handcuffs, “Everytime you see me, you mess with me. I’m tired of it. This stops today.”

With the backdrop of a mournful melody on the keyboard and the sound of sirens wailing, we hear Garner’s voice repeatedly gasping, “I can’t breathe, I can’t breathe.” Those are the words he said nearly a dozen times in July when a New York police officer wrapped his arm around the 43-year-old’s neck in a chokehold that led to his death. The words have also become a rallying cry for angry protesters around the world, demonstrating against a Staten Island grand jury’s decision to not indict the officer whose chokehold killed him.

A lovely woman’s voice begins singing the chorus: “Who is the man, with the strength to choose, when the rest refuse. This ends today, today, today.”

“The pain in my heart just refuses to heal, today some police just be plottin’ to kill,” Flagg growls in a deep voice reminiscent of rapper DMX. “Now his kids is without their next meal, the provider of the family no longer can pay his bills.”

“The grand jury lost their minds, time for an appeal, if Eric was family they would know how we feel,” he continues.

Some of the words from Rev. Al Sharpton’s eulogy play over the chorus before Erica starts rapping.

“To the grand jury I have a bone to pick, the decision that they made really made me sick,” she raps. “I can’t believe they would do that sh*t, they don’t know who they f**ckin’ with.” “It just came from the heart,” Erica said in an interview with the New York Daily News. “It’s the first time I ever recorded. We want to get it out there on the radio, anywhere, so as many people as possible hear it.”

She said her five-year-old daughter, Alyssa, recognized her grandfather’s voice gasping “I can’t breathe” when she heard the song for the first time.
Erica is pushing to make sure her father’s death is not soon forgotten. Last month she laid down on the sidewalk, staging her own die-in surrounded by other protesters, in the exact spot where Garner was seen on camera being choked by New York City police officer Daniel Pantaleo. Images of Erica Garner’s daughter lying down in front of the store on the corner of Bay Street and Victory Boulevard in Tompkinsville where he was confronted by police went viral.

Erica Garner said the family will use any proceeds from the song to put toward the family’s pursuit for justice.

The song can be downloaded here.