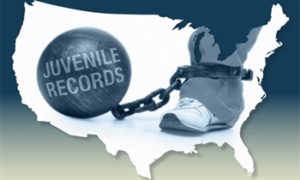 Young nonviolent offenders are being unfairly punished by a system that has made juvenile records open to the public, thus hindering their chances of ever getting beyond the mistakes they made as a child.

The juvenile system is already a flawed one that is constantly incarcerating nonviolent offenders and introducing them to the violent culture that the system is supposed to protect them from.

Reports show relatively high recidivism rates for young people who have been caught up in the juvenile system but even those who manage to avoid any run-ins with the law never seem to truly get their freedom back.

Juvenile records make it difficult for young people to get jobs, get into college, join the military or even buy a house.

“The juvenile justice system is intended to rehabilitate youth and prepare them for a productive future, yet our mishandling of juvenile records creates a paper trail that can lead to failure,” said Riya Saha Shah, Staff Attorney at Juvenile Law Center, according to Models For Change. “These records can follow children and youth into adulthood and often limit opportunities for success.”

While it is possible to have a juvenile record sealed from the public or expunged, it is a difficult and lengthy process that many can’t navigate without the assistance of an attorney.

While the negative effects of having juvenile records open to the public have been documented, positive effects seem to be non-existent.

Advocates of keeping the records public have argued that it promotes public safety, but there is no information to back this theory.

“Retention of juvenile records does little to improve public safety, but creates significant barriers to success for youth who are trying to move beyond the mistakes they made as a kid,” Lourdes Rosado, Associate Director at the Juvenile Law Center, told Models For Change. “Permanent, open records are like a ball and chain that prevents youth from becoming productive adults, reducing opportunities for employment, eroding the tax base and can lead to increased recidivism due to reduced job prospects.”

Less than 10 states in the U.S. have acknowledged these facts.

In other states, minor offenses are left dangling over people’s heads as they try to move forward with their lives.

It’s a bleak reality that far too many people face.

The Texas Public Policy Foundation estimated that about 10,000 youths are incarcerated every year for nonviolent offenses.

The sad truth is that the haunting shadow of a juvenile record is the least of many of these young offenders’ problems.

Across the country, juvenile systems have been failing to successfully rehabilitate young offenders after they have served their time.

Many become repeat offenders and their crimes become progressively worse.

The accessibility of juvenile records in the midst of a system that often fails to even provide the proper psychological support for young nonviolent offenders is yet another indication that the entire juvenile justice system needs a serious overhaul.