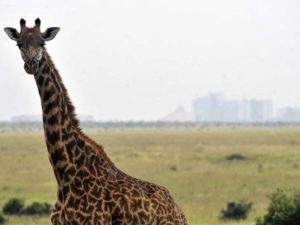 Giraffes, the gentle giants of the African plain, could be facing extinction as conservationists warn that poachers and bush meat hunters are causing their numbers to plummet.

The overall number of giraffes has fallen by 40 percent in the last 15 years, reducing the 140,000 giraffe population in Africa to fewer than 80,000.

In comparison, according to new research, there are roughly 450,000 African elephants. These animals are classed on the International Union for Conservation of Nature (IUCN) Red List as a species that “faces a high risk of extinction in the wild in the near future.”

The GCF has examined giraffe numbers over the past five years, concluding that unlike many other iconic African animals—such as lions or elephants—there has been no sustained attempt to protect giraffes.

“This trend is alarming and we have to act now to turn this situation around while it is still possible,” he said.

Many species of giraffe are so distinct as to be classed as a species in their own right—as has happened to the endangered mountain gorilla.

If the West African giraffe was granted similar protection the animal would immediately become the most endangered large mammal in Africa.

Dr. Anne Dagg, a leading Canadian expert, added her voice to those calling for greater protection for the animal, labeling the situation faced by the long-limbed herbivores, “incredibly awful.”