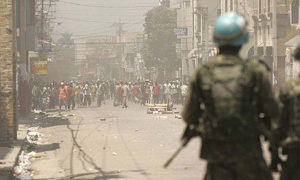 PORT-AU-PRINCE, Haiti — Scores of supporters of former Haitian President Jean-Bertrand Aristide took to the streets Tuesday to mark the 23rd anniversary of the coup that ousted Aristide in 1991, but riot police dispersed the demonstration with tear gas and water cannons as marchers failed to obey police orders about the march route and timeframe agreed upon for the rally.

The crowd of several thousand left from the downtown area, went through various streets in the Haitian capital Port-au-Prince, to end up in the bordering Tabarre district where Aristide lives. But police officers, who blocked the road leading to Aristide’s home, broke up the demonstration when demonstrators tried to force their way through.

“The police do no respect our right to demonstrate. They fired tear gas and throw water at us that makes our skin itch,” said Maxo Jean-Louis, 30, with a poster of Aristide in his hands, and saying he was a member of the “Lavalas” people, which is another word to describe supporters of the former leader.

Several weeks ago, a judge issued an arrest warrant for Aristide and later put him under house arrest on corruption charges. However, police authorities have not been able to enforce the orders of the judge because of lack of cooperation on the part of Aristide, who has refused to appear and who has angry supporters camping outside his gate to prevent his arrest.

“We the Lavalas people do not want Aristide arrested and we’ll make sure that this does not happen,” Margilus Petit, a pro-Aristide marcher, told HCNN on Tuesday.

One thought on “Supporters of Aristide Dispersed by Haitian Police”