Will a Detroit jury believe that Theodore Wafer really feared for his life on Nov. 2 when he blasted 19-year-old Renisha McBride in the face with his shotgun, killing her when she was looking for help after a car crash?

That’s the key question jurors will have to answer in the murder trial of 54-year-old Wafer that began Monday with jury selection.

Wafer is facing charges of second-degree murder, manslaughter and committing a felony with a firearm in the fatal shooting of McBride.

When she announced the charges in December, Wayne County prosecutor Kym Worthy said that while Wafer told police he killed McBride — whom Worthy described as “bleeding and disoriented” after a car crash  — in self-defense, she disputed that notion.

“There is no duty to retreat when you’re in your own house,” Worthy said, quoting Michigan law. She said the person acting in self-defense must believe his or her life is in danger.

“These are the appropriate charges, and he did not act in lawful self-defense,” Worthy said.

Legal experts quoted in several reports said Wafer must take the stand and be convincing if the self-defense claim is going to work.

“His testimony is essential. Without it, I don’t think they have much of a case,” Ronald Bretz, a professor at Cooley Law School and former defense lawyer, told The Guardian. “If Mr. Wafer does a good, dramatic job of relaying his fear, he has a chance.”

Lisa Bloom, a legal analyst for NBC News, said self-defense is going to be challenging for Wafer.

“This is certainly an unusual self-defense case because Theodore Wafer was in his own home. The door was locked,” Bloom said.

Bloom pointed out that Wafer admitted during the 911 call that he shot someone who was asking for help.

“I’d be very surprised if he was acquitted in this case,” Bloom said, adding that she believed the jury would at least convict him of manslaughter.

The makeup of the jury is expected to be vital in the case, particularly how many jurors come from the Detroit suburbs.

“Many of the white people in Dearborn Heights feel they are on the edge of the battle line,” Bretz said, referring to high-crime Detroit.

Defense attorney Cheryl Carpenter wanted to be able to present a map, based on police data, of about 80 police calls related to shots being fired within a one-mile radius of Wafer’s home in previous months, but Judge Dana Hathaway wouldn’t allow it.

Legal experts do expect the trial to contain some testimony about crime in Wafer’s neighborhood.

“If Ms. McBride had stayed at the scene of her car crash, where help was on the way, Mr. Wafer would never have been put in the situation … to use deadly force to protect himself,” Carpenter has said. The defense attorney has also balked at the characterization by prosecutors that McBride was “docile and meek.”

“In fact she was aggressive. She was violent. She broke part of Mr. Wafer’s house,” said Carpenter, who believes McBride broke Wafer’s screen door before the shooting, based on a defense expert’s opinion.

Hathaway also barred the defense from using selfies on McBride’s cellphone showing her with alcohol, money, marijuana and what appears to be a gun.

“Our defense is blown to pieces if you don’t allow me to argue to the jury that she could have been up to no good,” Carpenter told The Associated Press last month.

If convicted of second-degree murder, Wafer could face life in prison. The trial, which will be closely watched across the nation because of the racial implications, is expected to last three weeks. 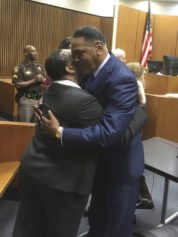