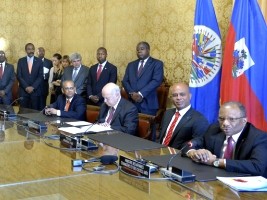 At the Washington, D.C., headquarters of the Organization of American States, Duly Brutus, the minister of foreign affairs of Haiti, signed the Inter-American Agreement against Racism, Racial Discrimination and related forms of Intolerance and the Inter-American Convention against all forms of discrimination on Wednesday, in the presence of OAS secretary general José Miguel Insulza and Haitian President Michel Martelly.

The Haitian foreign minister said that by signing both agreements, Haiti puts itself at the forefront of the fight against racism and racial discrimination in the region, and he also recalled that Haiti went through a long history of fights against segregation and domination, mentioning the historical role Haitians played at the beginning of the 19th century in fighting against slavery and in favor of the independence of the people of America, when Haiti “began to demonstrate its solidarity toward other peoples and to fight the colonial system of slavery.”

The secretary general highlighted that the conventions contained more than 30 causes of discrimination aimed at groups mentioned, therefore, establishing legal regimes that can be applied separately or independently.