Upward mobility within the ranks of Arab slaves was not rare. Tariq ibn Ziyad — who conquered Spain and whom Gibraltar was named after — was a slave of the emir of Ifriqiya, Musa bin Nusayr, who gave him his freedom and appointed him a general in his army.

Son of an enslaved Ethiopian mother, Antarah ibn Shaddād, also known as Antar, was an Afro-Arabic man who was originally born into slavery. He eventually became a well-known poet and warrior. Extremely courageous in battle, historians have dubbed him the “father of knighthood … [and] chivalry” and “the king of heroes.”

This kind of upward mobility did not occur in the European slavery system. 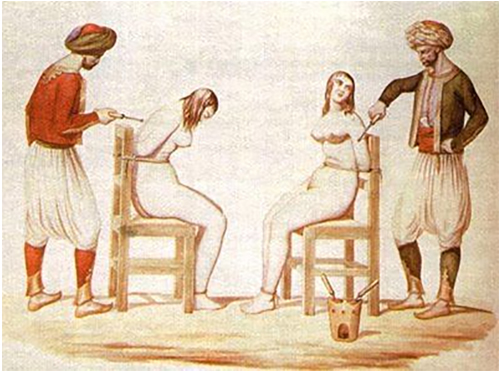 Arab Slave Trade Not Limited To Africa or Skin Color

One of the biggest differences between the Arab slave trade and European slaving was that the Arabs drew slaves from all racial groups. During the eighth and ninth centuries of the Fatimid Caliphate, most of the slaves were Europeans (called Saqaliba), captured along European coasts and during wars.

Aside from those of African origins, people from a wide variety of regions were forced into Arab slavery, including Mediterranean people; Persians; people from the Caucasus mountain regions (such as Georgia, Armenia and Circassia) and parts of Central Asia and Scandinavia;  English, Dutch and Irish; and Berbers from North Africa.