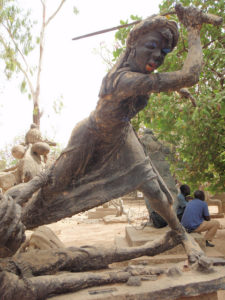 The great African woman called Amina Sukhera was a princess of Zazzau (now Zaria), in what is now northern Nigeria. She was born near the year 1533 and died about the year 1610. The Arabic name Amina means truthful, trustworthy and honest. Amina Sukhera was a fierce warrior. According to tradition, as a child, Amina’s grandmother once caught her holding a dagger.  As an adult, Amina refused to marry, and helped Zazzau (Zaria) become a focal point for trade and commercial activity.  She also expanded its territory. The introduction of kola nuts into cultivation in the area is attributed to Amina. A statue at Amina at the National Arts Theatre in Lagos, Nigeria, honors her, and numerous educational institutions bear her name.