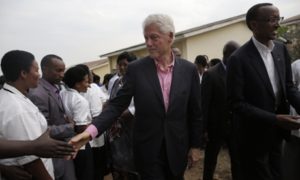 Newly released documents from the Clinton presidential library reveal how the administration worked to explain the often-criticized U.S. response to genocide in Rwanda.

Documents preparing President Bill Clinton for an interview with a Washington Post reporter, Tom Lippman, suggest a range of responses to possible criticisms of the administration’s response to one of the most serious post-war humanitarian crises.

Over around 100 days in the summer of 1994, members of Rwanda’s Hutu majority slaughtered between 500,000 and a million people, predominantly Tutsis. The international community was condemned for its slow reaction, which was in part attributed to the killing of several U.S. troops during an earlier United Nations mission in Somalia.

The memo for the president, written in September 1994  by a close aide, Tara Sonenshine, attempts to rebut potential criticisms in turn.

If Lippman suggested the U.S. experience in Somalia had prevented Clinton from doing “the right thing,” Sonenshine suggested the president should respond: “If we were truly spooked by Somalia, we would have turned away entirely, instead of committing 4,000 American troops and spending $500 million to give the people of Rwanda humanitarian help.”

Another answer suggests an earlier deployment of peacekeepers to the region should be used to say the administration had “responded to danger signs – not ignored them”, and makes a defense of a U.S. decision in April, weeks before the genocide began, to push for the U.N. to withdraw its peacekeepers.

Sonenshine was, however, unable to offer a rebuttal to every line of questioning she could foresee.

“On the decision NOT to provide U.S. peacekeepers and the notion that PRD 25 [Likely a typographical error in a reference to PDD-25, a Clinton directive governing U.S. involvement in U.N. peacekeeping missions] was designed to limit peacekeeping,” she wrote “with Rwanda fast-becoming the litmus test of that unwillingness — I leave that to you!”

A later note from Sonenshine to one of Clinton’s speechwriters, Bob Boorstein, returns to the subject of Rwanda, gently admonishing some in the administration for spurning the idea of a “moral” foreign policy.

“I know you bristled at the term “moral” especially vis-a-vis foreign policy,” Sonenshine wrote, “but the reality is that this president has a moral compass … we fail to trumpet the fact that he has the moral courage to take on difficult issues such as staying in Somalia even after the killing of U.S. servicemen, bringing the force of the entire U.S. military to bear on the crisis in Rwanda [and] sticking up for democracy in Haiti.”