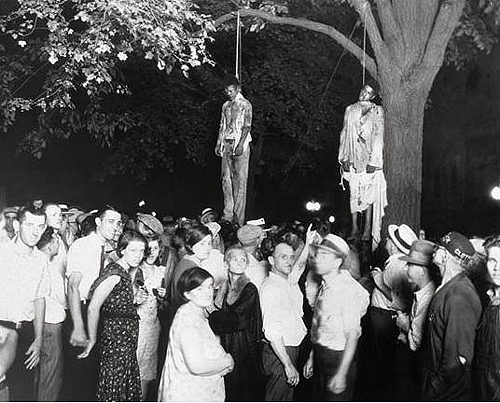 For years the U.S. government allowed racist white lynch mobs to murder Black men, women and children for practically nothing. The lynchings were so absurd one could argue that Black people’s lives were little to no value at all.  In fact, between 1882 and 1930 in just the 10 southern U.S. states of Florida, Tennessee, Arkansas, Kentucky, North Carolina, Mississippi, Georgia, Louisiana, Alabama, and South Carolina, 2,500 black people were lynched. That is an average of nearly one hanging every week.

Below are 10 unbelievable  reasons Black people were lynched in American history, according to Jana Evans Braziel, Assistant Professor at the University of Cincinnati.  Some of them are so startling they are similar to the modern-day killings of Black children by white men,  like in the recent cases of Trayvon Martin, wearing his hooded sweatshirt, Jordan Davis, playing loud music at a gas station, or Oscar Grant, simply hanging out at the train station on New Year’s Eve. Some black people were lynched for throwing stones.  Skipping a rock across a lake could lead to death.