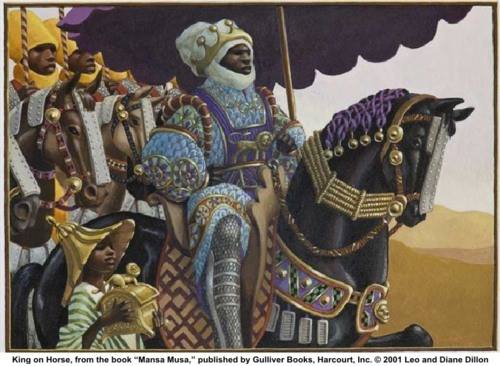 King Mansa Musa I (Emperor Moses) was an important Malian king, ruling from 1312 to 1337 and expanding the Mali influence over the Niger city-states of Timbuktu, Gao, and Djenne.

Musa ruled the Mali Empire and was estimated to have been worth the equivalent of $400 billion in today’s currency, which makes him the richest man to ever walk this earth. The emperor was a master businessman and economist, and gained his wealth through Mali’s supply of gold, salt and ivory, the  main commodities for most of the world during that time.

Musa maintained a huge army that kept peace and policed the trade routes for his businesses. His armies pushed the borders of Mali from the Atlantic coast in the west; beyond the cities of Timbuktu and Gao in the east; and from the salt mines of Taghaza in the north to the gold mines of Wangar in the south.