When the topic of the Moorish influence in Europe is being discussed, one of the first questions that arise is, what race were they?

As early as the Middle Ages, “Moors were commonly viewed as being mostly black or very swarthy, and hence the word is often used for negro,” according to the Oxford English Dictionary.

Author and historian Chancellor Williams said “the original Moors, like the original Egyptians, were black Africans.”

Arab writers further buttress the black identity of the Moors. The powerful Moorish Emperor Yusuf ben-Tachfin is described by an Arab chronicler as “a brown man with wooly hair.”

Black soldiers, specifically identified as Moors, were actively recruited by Rome, and served in Britain, France, Switzerland, Austria, Hungary, Poland, and Romania. St. Maurice, patron saint of medieval Europe, was only one of many black soldiers and officers under the employ of the Roman Empire.

Although generations of Spanish rulers have tried to expunge this era from the historical record, recent archeaology and scholarship now shed fresh light on the Moors who flourished in Al-Andalus for more than 700 years — from 711 A.D. until 1492. The Moorish advances in mathematics, astronomy, art, and agriculture helped propel Europe out of the Dark Ages and into the Renaissance. 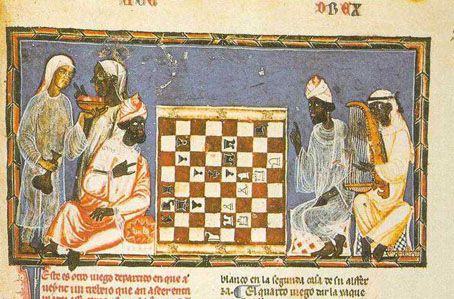 The Moors brought enormous learning to Spain that over centuries would percolate through the rest of Europe.

The intellectual achievements of the Moors in Spain had a lasting effect; education was universal in Moorish Spain, while in Christian Europe, 99 percent of the population was illiterate, and even kings could neither read nor write. At a time when Europe had only two universities, the Moors had seventeen, located in Almeria, Cordova, Granada, Juen, Malaga, Seville, and Toledo.

In the 10th and 11th centuries, public libraries in Europe were nonexistent, while Moorish Spain could boast of more than 70, including one in Cordova that housed hundreds of thousands of manuscripts. Universities in Paris and Oxford were established after visits by scholars to Moorish Spain.

It was this system of education, taken to Europe by the Moors, that seeded the European Renaissance and brought the continent out of the 1,000 years of intellectual and technological gloom of the Middle Ages.

255 thoughts on “When Black Men Ruled the World: 8 Things the Moors Brought to Europe”