President Obama was joined by Jay-Z and Bruce Springsteen in Ohio.

On Monday, in Columbus, Ohio’s Nationwide Arena, President Obama’s biggest statement to voters had little to do with politics, but the men he chose as his opening acts, musicians Jay-Z and Bruce Springsteen.

In choosing these particular acts—one born in the Brooklyn projects, the other to working folk in the recently ravaged New Jersey —Obama shifted his campaign away from facts and rebuttals back to a narrative of the American dream, the philosophical approach that led him to victory in 2008.

“They tell the story of what our country is,” Obama said of Jay-Z and Springsteen, “but also of what it should be and what it can be.”

The comment especially crystallized the connection between Obama and Jay-Z, whose friendship has attracted a blitz of media attention this election season. Indeed, the mogul and the President have formed an unsurprising friendship, likely due to their shared embodiment of American self-improvement.

Jay-Z, born Shawn Carter in the Mercy Projects of Brooklyn, removed himself from turbulent street culture to amass an estimated fortune of $412 million as a rapper, President of Def Jam Recordings and mentor to younger artists including Rihanna, Kanye West, Rick Ross, Ne-Yo and J. Cole.

Like Obama, Jay-Z grew up without a father and his path to success, even security, was not guaranteed.  The President and rapper currently have another shared similarity in their families and high-profile wives, Michelle and Beyoncé.

“Jay knows what my life is like,” said Obama at a fundraiser hosted by Carter’s 40/40 club, “we both have daughters and our wives are more popular than we are.”   Michelle and Beyoncé have formed a partnership of their own over the last presidential term, with the singer joining the First Lady’s “Let’s Move” campaign that guards against childhood obesity. 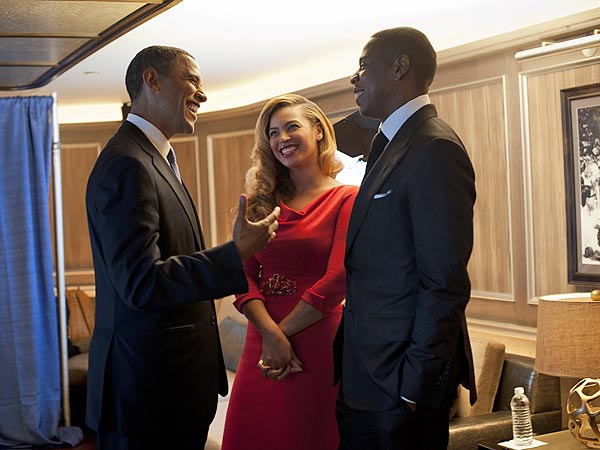 President Obama with Jay-Z and Beyonce.

Beyoncé also posted a handwritten letter to the President on her website, writing:  “You are the reason my daughter and nephew will grow up knowing they can truly be anything they want to be.”

It was with this strong sense of partnership and loyalty that her husband  Jay Z robustly entered Columbus’s Nationwide Arena on Monday, with a tailored version of his hit “99 Problems.”  The rapper playfully sang, “I got 99 problems but Mitt ain’t one,” infusing spirit and energy into one of the final Obama campaign stops.

Energy that many would argue Obama needed. Indeed, the 2008 election was one of spirit, not petty politics. Obama, noticeably aged during his first term, has fought to recapture that same sense of hope during the current campaign. Especially during the debates, the President appeared annoyed and short, further undermining the quiet optimism that characterized his initial candidacy.

If only by looking to Jay-Z and Springsteen, Obama attempted to regain some of that hope himself on the final day of his 2012 campaign. Whether voters have done the same remains to be seen. Early voting results suggest a victory for the President, but by an exceedingly narrow margin.   This time around, it will be a race to the end.

‘There Was Segregation’: Mathew Knowles Opens Up About ‘Racism’ In the Music Industry and It’s Impact on Destiny’s Child