COLLEGE STATION, Texas (AP) — A Texas law enforcement officer attacked as he brought an eviction notice to a house Monday was among three people, including a shooter inside the home, killed Monday near the Texas A&M University campus.

A 65-year-old man also died, while three other law enforcement officers and a 55-year-old woman were wounded, in the shootings at an off-campus home not far from the university’s football stadium, College Station Assistant Police Chief Scott McCollum said.

Brazos County Constable Brian Bachmann had gone to a home with an eviction notice just after 12 p.m., McCollum said. A man in his mid-30s who lived there opened fire from inside, he said.

Officers responding to calls describing an officer down saw Bachmann wounded on the ground in the front yard, then got into what McCollum described as an extended shootout with the gunman, who eventually was shot. ‘People Are Uncomfortable with a Black Woman Being In a Power Position’: Texas A&M University Basketball Coach Sydney Carter Speaks Out About Criticism Over Outfit 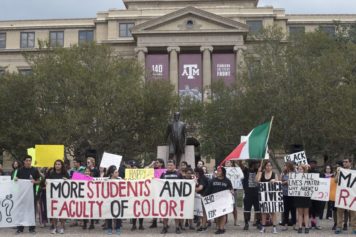 Mandatory Courses on Race, Anti-Racism Could Start at Texas A&M As Soon As Next Semester