The Washington Wizards today traded forward Rashard Lewis and the 46th pick in next week’s NBA Draft to the New Orleans Hornets for center Emeka Okafor and swingman Trevor Ariza.

Lewis is entering the last season of a six-year, $118 million contract and could be a candidate for the amnesty clause.

Okafor has never lived up to being the second pick in the 2004 draft. He averaged a career-low 9.9 points and 7.9 rebounds last season, missing time with a sore left knee. Ariza averaged 10.8 points and 5.2 rebounds.

The Hornets didn’t have a second-round pick. They also have the first and 10th selections in the first round. Why Bulls Won’t Play Carmelo Anthony After Trade from Rockets 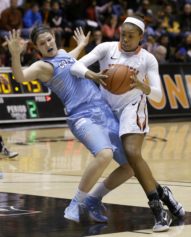