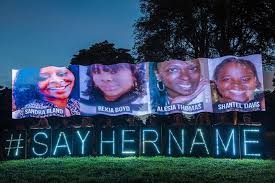 Black Twitter had been extremely vigilant in pointing to the police brutality and deaths of Mike Brown, Eric Garner, and other Black men who died while in police custody.  The #SayHerName hashtag was created by the African American Policy Forum as a means to raise awareness about police brutality against Black women.  Not only did the hashtag draw attention to those cases in the media that were often ignored, it also allowed others to share their experiences and encounters with police violence.

Not only did NBC’s live version of The Wiz surpass all expectations in terms of the number of viewers it brought in, but there were some moments while watching the program that caused Black Twitter to erupt with hysterical memes.  While Back Twitter celebrated this night of “Black excellence,” it also had to face the barrage of racist Tweets about the cast being “all Black.”  Black Twitter was swift in its response, pointing not only to the play and film’s 40 year history, but reminding those who forgot that there already was an all white version of The Wiz, the original version, The Wizard of Oz.