The North Carolina woman fittingly dubbed “South Park Susan” after she was caught on video racially harassing a pair of African-American women in the parking lot of a Charlotte apartment complex has pleaded guilty to her crimes, local station WBTV reported.

Susan Westwood, 51, pleaded guilty Wednesday to two counts of simple assault and misuse of the 911 system in connection to the Octobers 2018 incident, which unfolded at the Camden Fairview apartments. 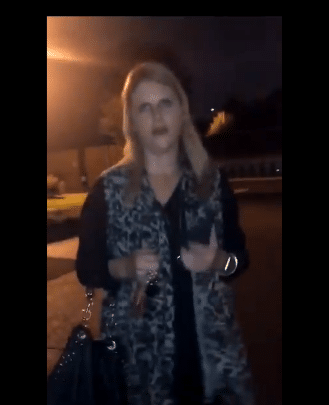 At one point, Susan Westwood threatens the women and asks, “Do I need to bring out my concealed weapon?” (Twitter screenshot)

A judge sentenced the Charlotte woman to 12 months probation and ordered her to pay court fees. In addition, Westwood is required to participate in community support meetings, along with “any after-care alcohol programs recommended as a result of her substance abuse assessment.”

According to the outlet, the judge also ordered Westwood to attend weekly meetings with an organization called the “White People Caucus,” a group launched by Organizing Against Racism aimed at encouraging participants to “examine and deconstruct internalized racial superiority and develop a deeper awareness of the power and privilege.”

Westwood must also participate in a biannual summit hosted by leadership collaborative Race Matters for Juvenile Justice, which is scheduled this fall.

It was last October that sisters Leisa and Mary Garris said they were waiting for AAA in the parking lot of their complex when Westwood came over and began harassing them. The siblings, who filmed the bizarre encounter, said they dialed police when Westwood became belligerent and assaulted one of them.

“I wanna make sure there’s nothing going on,” Westwood says in the video, getting up in the women’s faces and threatening to “bring out my concealed weapon.” “Is your boyfriend here. Is your baby daddy here? Nobody cares, I’m white and I’m hot … ”

In the clip, Westwood brags about her salary, among other things, and at one point tells the women they “don’t belong” there.

Authorities said Westwood then called 911 herself and falsely accused the sisters of trying to burglarize nearby apartments. She ordered officers to come and remove the Garrises, even offering to pay police.

“There are folks that are trying to break in,” she said in the nearly six-minute call. “I’m trying to do it in a very clandestine manner because it’s actually on Fairview Road. They are actually people that I’ve never seen here before — but they’re African American.”

Westwood was fired from her job and evicted from her apartment following the incident.

She’s since been ordered to have no contact with the Garris sisters unless “its in the realm of a therapeutic or legal setting.”