“Love and Hip Hop: Atlanta” alum Joseline Hernandez sent social media into overdrive this week after she talked about dropping a new single that alludes to her backside.

The self-proclaimed “Puerto Rican Princess” took to Twitter on Tuesday, telling fans that she plans on dropping a new single titled “Bootyhole.” To prove how serious she was, Hernandez tagged Baller Alert’s verified Instagram account with 100 emojis, and the news outlet responded, “Send us the exclusive.” 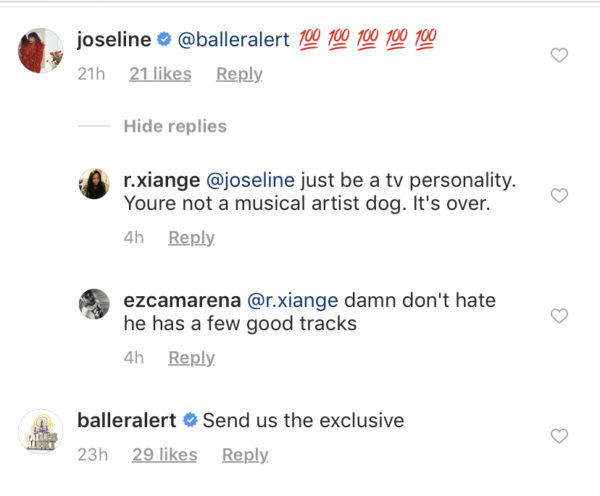 Fans’ first instincts were to be thrown off by Hernandez’s idea to create a song alluding to the nether end of her alimentary canal.

“Head Scratch!” another person wrote. “She’s taking mad Ls with this one has she lost her mind 🤔?”

“What the hell! I read it a few times before I actually accepted the that those are indeed ‘lyrics’ 🤦🏽‍♀️,” someone else commented.

Fans finally put two and two together when they realized Hernandez’s teasing her new song “Bootyhole” comes two weeks after she accused Stevie J. of hitting her up during the wee hours of the morning.

“I think she’s sneak dissin’ “Steebie” and Faith,” a fan wrote. “She been put him on blast on saying he wanted to see her butt hole 😂 🤦🏽‍♀️.”

Another wrote, “She talking about Stebie like it done in the butt I can’t deal rn 😂.” Earlier this month, Hernandez accused her ex-fiancé and “LHHATL” castmate Stevie J. of making a pass at her while married to his wife Faith Evans. An intimate photo of Stevie and Evans was posted on Baller Alerts Instagram account with the caption “#DaJordans,” whereupon the reality veteran warned Evans to “keep an eye” on Stevie, who supposedly called her.

“So sweet of my baby daddy and his wife!” the Latina artist wrote underneath the image. “Someone tell her to keep an eye on him when he calls to see my butthole in the am ‍.”

Hernandez and the Stevie share 2-year-old daughter Bonnie Bella together. The pair were off and on for years before finally calling it quits in 2016. The Puerto Rico native claimed her ex-fiancé has been absent from their daughter’s life and hasn’t paid child support in months. She wrote in an Instagram post from Feb. 21, “Mother and daughter 4 Eva love. (I DONT NEED NO DADDY-BY JOSELINEHERNANDEZ).”