A banging body and Angela Bassett go hand-in-hand, and she had her perfectly fit figure on full display recently.

The star of Fox’s “911” headed to “Jimmy Kimmel Live” on Thursday to tape an interview for the late-night talk show promoting the series. Photogs captured the 60-year-old in a green two-piece tracksuit and orange sneakers that complemented the stripes running down the side of the outfit. 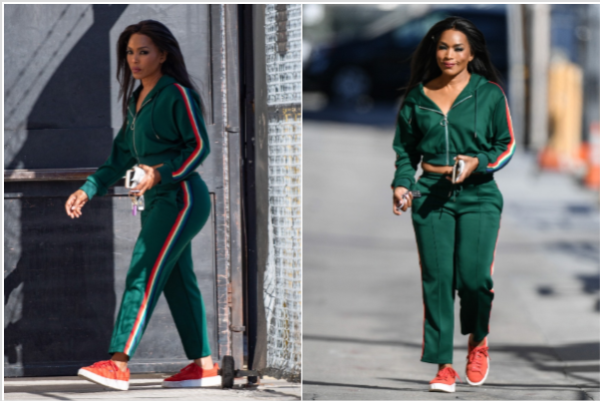 But those online took notice of her sculpted derrière once she turned to the side.

“Her butt was perfection since Stella Got her Groove Back.”

“And the best part is that Angela is all natural….She’s not a Build A Bi8ch like these Instagram h0es.”

“she looks great! I didn’t know she was so short.”

Bassett has long made headlines for her incredible body, and last July while promoting the film “Mission: Impossible Fallout,” she gave the public insight on how she keeps her figure so fit.

“Follow a plan, not one that’s too restrictive,” she said to TV host and journalist Laila Muhammad of her dietary habits. “I happen to follow one that sort of cycles through, like, Monday/Tuesday I may eat carbs, fruit. Tuesday/Wednesday I may do protein, veggies. Veggies every day, no fats those four days and then the last three days I flood it with fat. Good fat, though. Maybe coconut oil, salmon, almonds, almond butter, olive oil, walnut oil, that sort of thing. I don’t do any dairy. I don’t do any bread flour. I’ll do Ezekiel bread which is sprouted, sprouted bread.”

In addition to eating right, Bassett ensures she hits the gym, mixing in cardio and strength training during the week and then wrapping things up with a massage at the end of the week.

And while the star has no issue sharing her fitness secrets, she does take issue with a backhanded compliment surrounding her looks and her age.

“I guess it’s a high-class problem to have. But you don’t really know what to say when someone says: ‘Oh, my God, you look so good [for 59],” she told Net-a-Porter magazine in July 2018. “What do they expect? For you to be completely broken down?”

She looked anything but that by the time she got dressed and headed out on set to “Jimmy Kimmel Live.” But actor and fellow guest Joseph Gordon-Levitt admitted he felt pretty broken down when he got a photo next to her backstage.

“@ImAngelaBassett is luminous. Met her as she came off stage and I was on my way out. Wish I’d still been dressed up, I feel like a schlub,” he tweeted Thursday.