Members of Black fraternities and sororities are furious after singer Layla Hathaway posted a photo of herself in a bucket hat featuring the letters of Alpha Phi Alpha Fraternity, Incorporated.

The daughter of soul singer Donny Hathaway posed in the hat to honor her late father, who was a member of the fraternity, according to Hello Beautiful, and put the selfie on her Instagram account on March 24. The image was only accompanied by two hashtags: #daughterofAlpha and #daughterofsoul. Since then, members of the Black fraternity have criticized the vocalist.

Instagram user JP commented that Hathaway should not be wearing the hat because “it’s highly inappropriate.” Lawrence Ross, an Alpha who was pledged by Lalah’s father, said she could have asked Donny’s fraternity brothers about wearing approved apparel to honor her father. He said he was “a bit disappointed that you didn’t reach out to see which ones could be used to honor Bro. Hathaway.” Not all members have come down on Lalah. Some have defended the star. Carol Lawrence said he was “deeply moved” by the photo.

But comedian Aaron Spivey-Sorrells said if a man who was not a member of the frat had posed in the cap, Alphas wouldn’t be so understanding.

Hello Beautiful reports that anything that has the letters or symbols of sororities and fraternities is expected to only be worn by those who pledged. Donny Hathaway pledged Alpha at Howard University in Washington, D.C. during the 1960s. He attended on a fine arts scholarship, according to Rolling Stone.

This isn’t the first time Black Greeks have been angered by the portrayal of their organizations in the media. Members of several Black sororities banded together to halt Vh1’s reality series, “Sorority Sisters,” in 2014 to no avail. The show went on to air later that same year. Myths Dispelled: These 6 Civilizations Were Not As White as History Has Been Reporting 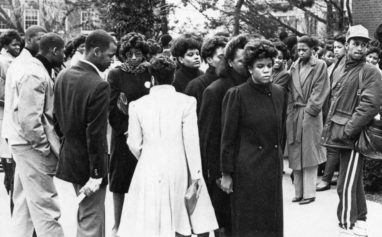 Hampton’s March Madness Victory Is Celebrated By All HBCUs