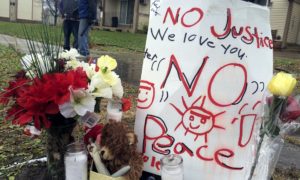 A makeshift memorial is seen at location where Jamar Clark was shot by police early Sunday in Minneapolis. (Reuters)

Jamar Clark, a Minneapolis man who was allegedly shot while handcuffed, has died, according to several media sources. Clark, who was unarmed, was shot on Sunday following a domestic dispute with his girlfriend. Eyewitnesses said he was handcuffed by police when they heard a gunshot go off. Clark was taken to hospital where he was pronounced brain dead. He died on Monday after being taken off life support. Clark’s family members said he was shot “in the head, execution style.”

Several eyewitnesses have come forward to say they saw the incident. One of them is 10-year-old Ze’Morion Dillon-Hokins, who said he witnessed Clark being shot while handcuffed, according to The Daily Mail.

“They took out a gun and ‘popped’ him in the face,” said Dillon-Hokins, who also gave a statement to police.

Tequila Dillon, Ze’Morion’s mother, said her son was traumatized by the incident.

“No child should see something like that and they are getting a therapist to try help him over it. He is off school,” said Dillon. “I hope what he has told the police and the bureau will help everybody get to the truth.”

According to The Guardian, Lisa Hoskins, another eyewitness who lives in the area, corroborated Dillon-Hokins’ statement.

“He (Clark) was handcuffed. He wasn’t struggling,” she said. “They told him to back up off the car, then they rushed him, put him in handcuffs. That’s when you heard the ‘boom.’”

The shooting set off a wave of protests in Minneapolis. Local Black Lives Matter activists have camped out in front of a police station and say they won’t leave until an officer has been arrested. Two officers have been placed on administrative leave, according to Minneapolis police chief Janeé Harteau.

The incident is currently being investigated by the Minneapolis Bureau of Criminal Apprehensions (BCA). At a Tuesday press conference, Drew Evans, BCA superintendent, said his agency had obtained video from bystanders, the housing authority and an ambulance. BCA investigators had also found handcuffs at the scene, which contradicts the police’s initial statement.

“There were handcuffs at the scene,” he said. “We’re still examining whether they were on Mr. Clark at the time of the shooting.”

Minneapolis Mayor Betsy Hodges has called on the U.S. Department of Justice to open a civil rights investigation into Clark’s death.

“We need all the tools we have available,” said Hodges at a Monday press conference. “Everyone involved needs and deserves the truth and the facts.”