“The Bad Girls Club” season 11, episode 14: “Paradise Lost” premieres tonight on Oxygen, where Tiana, Jaz and the girls do their best to kick Hailey out of the house.

New girl Hailey got quite the memorable welcome last week to the BGC: Miami house. Not only did all the girls jump her at once, but they threw her clothes into the pool! Now that she’s sober in this week’s episode, she’s making Mercedies feel pretty bad about judging Hailey so quickly and her participation in the bullying. “Me and my mom work hard to have the things that we have,” Hailey says. “I f**** up, I get it, you already wooped my ass. What else do you want from me?” Mercedies feels the guilt hard, but Hailey’s mom isn’t going to let any of it slide. “Set some s*** on fire!” she advises her daughter over the phone–and that’s only the G-rated part

Meanwhile, the BGC producers call the girls together to talk about their consequences after last night’s fight. Also, the girls plan a big surprise for Tiana’s birthday, while Jaz is ready to settle the score with Hailey once and for all.

“A group of rebellious women are put in a house together in an experiment intended to moderate their behavior. These women have issues with anger, trust and control, and they claim they want to change. Will living together help them move forward and turn their lives around — or will chaos rule?” 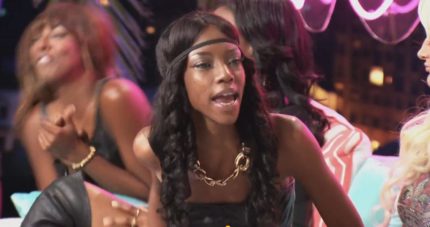