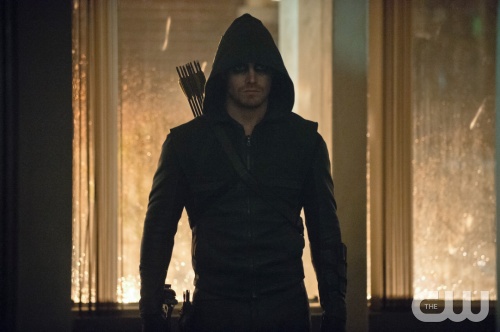 The synopsis for “Broken Dolls” is as follows:

“Lance learns a criminal named Barton Mathis, who he put away years ago, broke out of prison during the quake and is back to torturing and murdering women. Felicity offers herself as bait so Arrow, Diggle, and Lance can catch this villain, but the plan goes awry. Furious, Mathis kidnaps Laurel in retaliation and plans to murder her while Lance watches. Meanwhile, Thea and Oliver are stunned when District Attorney Adam Donner seeks the death penalty for Moira. Oliver asks Roy to help him find the Canary.”

“After a violent shipwreck, billionaire playboy Oliver Queen was missing and presumed dead for five years before being discovered alive on a remote island in the Pacific. When he returns home to Starling City, his devoted mother Moira, much-beloved sister Thea and best friend Tommy welcome him home, but they sense Oliver has been changed by his ordeal on the island.

“While Oliver hides the truth about the man he’s become, he desperately wants to make amends for the actions he took as the boy he was. Most particularly, he seeks reconciliation with his former girlfriend, Laurel Lance. As Oliver reconnects with those closest to him, he secretly creates the persona of Arrow – a vigilante – to right the wrongs of his family, fight the ills of society, and restore Starling City to its former glory.

“By day, Oliver plays the role of a wealthy, carefree and careless philanderer he used to be – flanked by his devoted chauffeur/bodyguard, John Diggle – while carefully concealing the secret identity he turns to under cover of darkness. However, Laurel’s father, Detective Quentin Lance, is determined to arrest the vigilante operating in his city. Meanwhile, Oliver’s own mother, Moira, knows much more about the deadly shipwreck than she has let on – and is more ruthless than he could ever imagine. The series stars Stephen Amell as Oliver Queen, Colin Donnell as Tommy, Katie Cassidy as Laurel Lance, David Ramsey as John Diggle, Willa Holland as Thea Queen, with Susanna Thompson as Moira Queen and Paul Blackthorne as Detective Quentin Lance.”